The 5 Things I Want For You… 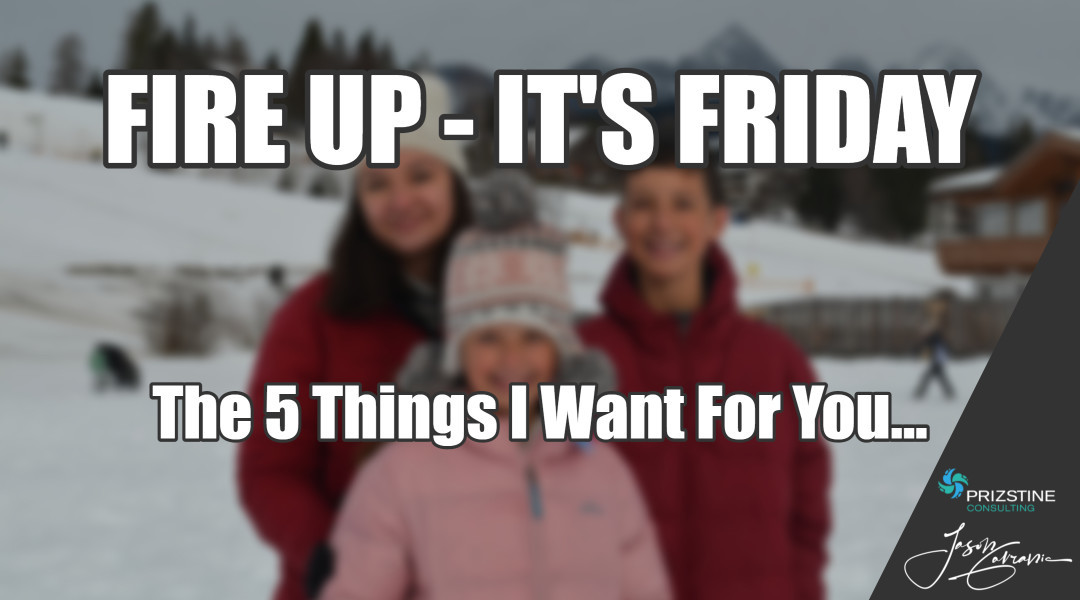 Around about early December last year (2019) when we were still allowed to travel, I attended a Workshop in Queensland with one of my mentors and he challenged the group to list the 5 things that we wanted for our children.

A lot of people were quick to give the stock standard answers like “to be successful”, “world peace”, “lots of money” and a “planet that will survive the climate change Armageddon”. Note that COVID -19 hadn’t hit the news-stands yet!!

I must admit that I didn’t take the question too seriously to start with.  In fact, my initial thoughts were “it doesn’t matter what I want for them, they never listen to me anyway.”

But as always, my mind started to tick over, and I quickly realised there was a lot more to the question than I had given it credit for.

I mean…what did I really want for my children?

It took me a bit of time and a lot of serious thought, but I eventually got there in the end.

I thought it would be a good idea to share the 5 things that I want for my children.

1. Be Your Own Success Story

You are not me.  And you are not your mother.  You are you and it is extremely important that you are confident and proud of being you. Despite the fact that there are some 7 billion or so people on the planet, there is no-one else out there quite like you.

Always have the will and fortitude to forge your own path and know that your family will always have your back.

With the amount of FAKE news being peddled in social media (and mainstream media for that fact), you need to keep learning so that you can have a mind of your own and form credible opinions based on FACT.  You are definitely entitled to your own opinions, but you are not entitled to your own facts.

If you don’t know it yet, you will soon find out that there are always three sides to every story – Yours, Mine and the TRUTH!!

Be knowledgeable but more importantly, always ensure that you act on that knowledge and don’t remain the “forever” student.

3. Make and OWN Your Decisions

Being able to make decisions is arguably one of the greatest qualities you can have. God only knows the level of procrastination some people go through just to avoid making any decisions at all.

But it is the way you own the consequences of your decisions and actions that really define the person.

So, don’t be afraid to make decisions, own your decisions and change them if you get it wrong. You’ll always have my backing if you do this and do it with integrity.

Speaking of fear – embrace it. Everyone who’s anyone has had to deal with fear at some point in their life. It’s how they deal with it that defines them and how they live their life.

But whatever you do, don’t rely on the third way which is Freeze!! Everything’s All Right. It’s never alright if you don’t act (refer to the Neanderthals I mentioned in a previous post).

For me, this is probably the most important of the 5 things I want for my kids.

We all know that children have a very natural ability to dream and dream big. There appear to be no boundaries. But over time, and despite our best intentions, we as parents and a community, progressively grind that out of them.

No matter what people say, don’t ever let the fire burn out. Chase your dreams hard and don’t give up on them.

There is no doubt that we are living in crazy times.  I think I would nearly be speaking on behalf of everyone when I say that 2020 can just f&*k off in a big way and not come back.

But at the same time, it’s really made me reassess what’s important. And this exercise in thinking of the 5 things I wanted for my kids really challenged me. But it was worth it. You should give it a try…

In the meantime, take the time to enjoy the upcoming festive season with your children and I genuinely hope that it leads to a safe and prosperous 2021.

Mastering the Art of Leadership - The 5 Critical Steps to Becoming Tomorrow's Leader...TODAY!