Australia Day – To Change or Not to Change 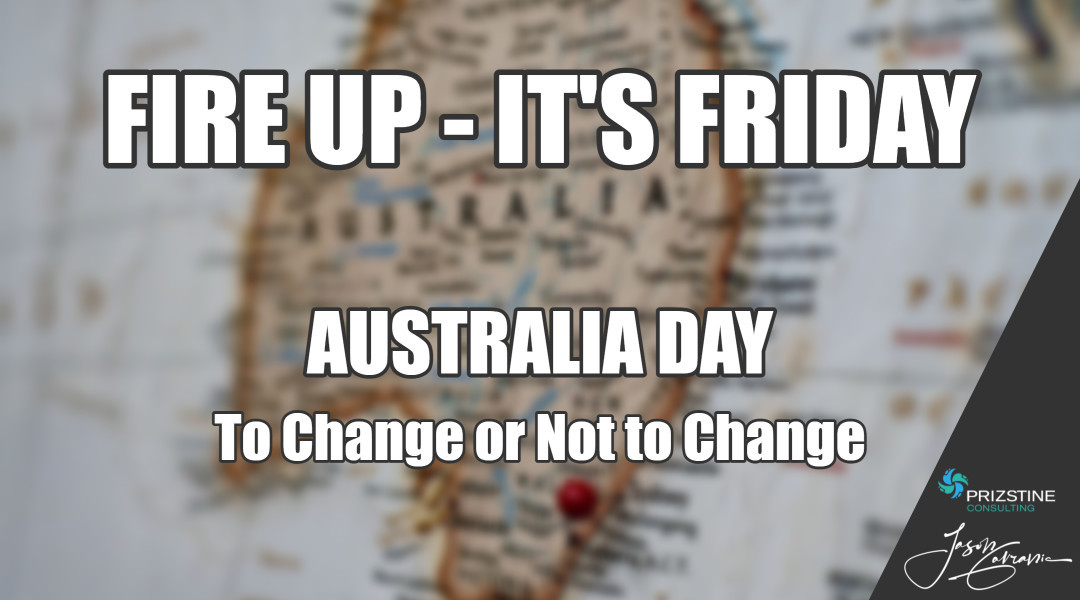 During the week, the majority of us celebrated Australia Day.

As a proud first-generation Australian, I consider this to be an important day for me and my family. It gives us a chance to pause and reflect.

A chance to think about what it means to be Australian and the opportunities that it has provided.

But, unless you’ve been living under a rock, it has been hard to escape the attention that the specific date of 26 January has received.

Some people are steadfast and resolute in their need to keep Australia Day on this date.

For others, this date brings feelings of pain and trauma due to past wrong-doings.

And then there are those that are unperturbed either way.

The thing is, I believe the argument has reached a point where those that oppose the change may now only be doing it in spite of the “other side”.

And those that want change may never be happy because, whatever the date, they will always link Australia Day to the past.

It is for that reason that I believe the topic now needs the one thing that has been missing all along in these discussions.

It needs true leadership and open-mindedness from all sides.

As a first-generation Australian, the love of this country cannot be understated. My family left a country that had been ravaged by the fascist regimes led by Hitler and Mussolini during the Second World War for a better life.

During the Second World War, my grandmother had fled her village on the island of Korcula (in what was then known as Yugoslavia) with her two eldest children (my father had not yet been born) to live in a makeshift camp in Egypt until the end of the war.

This displacement was difficult for her given that my grandfather was in the armed forces back home.

When they returned back to Europe, things were difficult for a long time while the post-war rebuild was under way. Many people left for places like Australia, New Zealand and America in search of better lives.

In late 1970, my father followed his brother and made the long trek across the water to come to Australia to make a better life for himself and to provide assistance to his family back home.

My mother’s family had made this move some eight years earlier when my grandfather came out for 18 months, worked hard to set up a home and then brought over his wife and two eldest children.

They all worked hard in back-breaking jobs to improve their lot in life and would then come home and work some more in the market garden that my grandparents owned.

They did this with the view that hard work would open the door to opportunity for them and their children.

My parents worked hard because they wanted to make sure that their children had greater opportunities.

And Australia definitely afforded them those opportunities.

Why 26 January Is Important To Me

On 26 January 1988 (the Bicentennial Year), my father finally received his Australian citizenship.

I’ll be honest – up until then, no-one in my family had really paid much attention to Australia Day. We knew about the First Fleet but that was about it.

But I remember attending the ceremony with my father and I just recall the huge smile he had on his face.

If you asked him now, he’d never admit it. But he was proud.

After years of hard work as a concreter on construction sites (talk about stereotypical), he’d finally been accepted into the best club on Earth.

He was finally an Aussie.

So from that day on, 26 January meant something to us. And it still does to this day.

But How Can 26 January Be “Australia Day”?

Having said that, I’ve always been the inquisitive type. I’ve always loved to question things (just ask my wife – it drives her nuts).

And I’ll be up front here – I am a parochial West Australian.

With that in mind, I could never quite understand why 1 January was not celebrated as Australia Day (with the exception of it being New Years Day of course).

After all, didn’t the states of Australia join and became a Federation on 1 January 1901.

My West Australian blood would always query the fact that we were celebrating the landing of a few boats on the east coast – not the birth of a nation.

Those bloody Eastern States treating the state that props up the nation with disdain again (just joking…or am I?).

But seriously, if not 1 January, why not ANZAC Day?

Surely, if there is any day that stirs up emotion in any Australian, it has to be 25 April.

The sense of mateship, comradery, never leaving a mate behind, sacrifice for a better future – all of the things that make this country great – had their beginnings here.

But it would be wrong to celebrate on a day of remembrance and reflection.

Like All Nations, Part Of Our History Really Sucks

Up until recently, I hadn’t paid much attention to our own history. I’d always been tied up in European history (particularly the Balkans region) because that was my heritage.

And as 26 January rolled around, I’d get annoyed with all of this “Change the Date” talk without really taking any time to listen to that side of the conversation.

But if you take away the people who’ll join any cause just so they don’t need to work for a living (you know who you are), and you start to listen to some of the stories and history of those that have been truly aggrieved, you begin to understand that there is some genuine hurt, pain and anguish attributed to Australia Day for them.

Now, I’ll be upfront. I’m not an advocate for changing the date. I like 26 January as the date because I have good memories attached to it.

But, to be dismissive of our history and the pain it has caused to our Aboriginal culture, is just plain wrong.

And it is a culture that us immigrants don’t know too much about.

But Will Changing The Date Solve Anything?

That is an interesting question.

And my view is that I actually don’t think it will. Why?

Because I don’t think it is the date that causes the anguish. I think it is what is attributed to Australia Day that stirs the raw emotion within the Aboriginal culture.

Until all parties can accept our history, close the door on it and move forward, this argument will continue to happen – no matter what the date is.

We genuinely cannot progress until we acknowledge our past, learn from it and then bury it.

After all, you can’t go forward if you’re always stuck in reverse.

This Is Where Leadership Comes In

Leadership from all parties is absolutely critical in this discussion. And we definitely should not be flippant about it.

Our leaders, both Aboriginal and non-Aboriginal, need to listen to their constituents on this issue.

But they then have to have the conviction to come together and make a decision that is right for the entire nation.

There needs to be some level of consensus.

We know that some people will be happy with the decisions made. And others will not.

Regardless, both sides need to be open-minded and honest. They need to take each other seriously in discussions.

And there needs to be empathy.

We need to have a date that brings us all together.

A date that defines those great Aussie qualities, like mateship, that differentiate us from the rest of the world.

What If The Date Changes?

If changing the date will help the nation bury the past and enable all of us to move forward, then let’s change the date.

Like I said earlier, I am not an advocate for change. I’m more than OK with 26 January remaining as Australia Day.

But for me, it’s not about the actual date. It’s about the day.

It’s about having a day where we can all stand together and celebrate the fact that we live in the best country in the world.

That’s right USA – our country is the best – not yours.

The only stipulation I have – it needs to remain in the summer.

After all, celebrating Australia Day in the cold and not being able to go to the beach would just be wrong, wouldn’t it?

Mastering the Art of Leadership - The 5 Critical Steps to Becoming Tomorrow's Leader...TODAY!